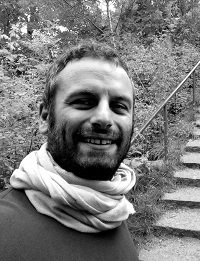 Francesco Romano has a master degree in political science and international relations. He is specialised in Human Rights and International law. After his master degree, Francesco decided that the degree was not enough and he attended summer schools and courses for learning how to write projects and how to manage them. Since then he started working on big (European and other) programmes. He discovered the love of being trainer when he did his internship at UNICEF in Lecce (in 2004) and after when he was in charge of training of the new volunteers coming in Amnesty International Italy.

After his studies, Francesco did his European Volunteer Experience in Lithuania and later he worked in Peru. Francesco worked for several universities as a researcher and for big NGOs like Amnesty International as project manager and trainer. Back in Europe, he worked in Spain for the Spanish International cooperation.

He is working as a trainer and project manager for 10 years and for 2 years he is working with the Italian National Agency, organising seminar and conferences. He is working a lot in the field of the social innovation and entrepreneurship.

In 2013 together with a friend of him, he founded the organisation SEI. He is the vice-president of the organisation and he is the trainer and the project manager of the international projects (EU, UNDEF, etc.).