Thessaloniki (or Salonica), the capital of Macedonia Prefecture, is the second largest city in Greece, after Athens. In fact, the town is honorarily called “co-capital”, for its historical and administrative importance. The history of the town started in the ancient times and due to its strategic location, it played an important economic and political role in the wider region of the Balkans. The town was founded in 315 BC by king Cassander of Macedon on the site of a former settlement named Therma. He named it after his wife Thessalonike, the half-sister of Alexander the Great.[1]

How to get to Thessaliniki The Macedonian airport, at the area of Mikra, is the second largest airport of Greece and is linked with most destinations of Europe and the Balkan countries. To get from the airport to the centre of the town will take you from 20 to 45 minutes, depending on the traffic. You can go to the centre of Thessaloniki using bus number 78. It runs every 45 minutes and it takes approximate 45 minutes.[2]

Getting around in Thessaloniki 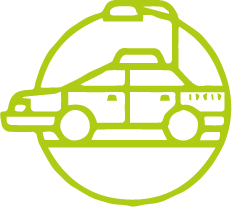 Taxis are usually easy to find unless you’re going to the Upper City. Many taxis are reluctant to make this trip because there is a little guarantee of a return fare down, and they may — unlawfully — refuse. But if you’re in the cab before you state your destination, there’s little the driver can do but take you there. Have someone write out your destination in Greek, so that you can show the driver where you want to go.[3] If driving, take note that Ano Poli’s streets are steep and can be rather narrow, so avoid driving there if you’re not used to such conditions. If you can’t find free parking (a common problem in hectic Thessaloniki), try the municipal parking at the port (per hour €2). 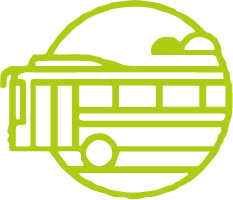 You can cover most of the distances in the city by foot or using the local buses. Tickets can be bought either at the kiosks or from the vending machines on the bus. If you buy the ticket on the bus, remember to have coins. All tickets must be validated and are usable for 70 minutes. Different kind of day passes are also available.[4]

Tourist lines: OASTH also operates a tourist line, (Bus number 50 (Cultural line)) and follows a figure-of-8 route past all the major tourist sights of the city. There is an English speaking guide aboard, who provides maps and information. The whole route takes 50 min, and it departs every hour on the hour from the White Tower. A ticket on this line costs €2.

Thessaloniki’s bike sharing system has 8 stations and 350 bicycles. In our fleet apart from common 26” and 28” bicycles, they have children bicycles, electric bicycles, family bicycles with 2 and 4 seats and electric mobility scooters. Along with the renting activity, they organize bike tours in the city of Thessaloniki with the cooperation of certified tour guides.

Thessaloniki was the sister of Alexander the Great. She was married to a man named Kassandros, and it was also he who founded the city in 315BC. Before that, there was a much older settlement here called Therme.[6]

Thessaloniki was the second-most well-fortified city in the Byzantine Empire, after Constantinople (Istanbul). The walls can still be seen above the city today and despite the many earthquakes, they are still standing. [7] 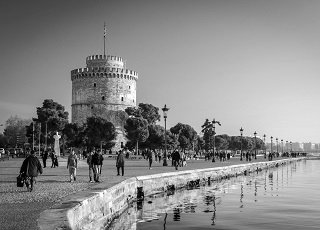 The White Tower, standing along the beach promenade, is the symbol of Thessaloniki. Constructed in the 16th century by the Ottomans, it was used as a fortress, a prison and a university workshop. Today it hosts a museum.

The Archaeological Museum of Thessaloniki is a museum in Thessaloniki, Central Macedonia, Greece. It holds and interprets artifacts from the Archaic, Classical, Hellenistic and Roman periods, mostly from the city of Thessaloniki but also from the region of Macedonia in general. Address: Opening hours: Daily: 8 am – 8 pm. Admission: full: €6, reduced: €3.

The Museum of Byzantine Culture is a museum in Thessaloniki, Central Macedonia, Greece, which opened in 1994. Opening hours: Daily 8 am – 8 pm. Admission: full: €4, reduced: €2.

The Walls of Thessaloniki are the city walls surrounding the city of Thessaloniki during the Middle Ages and until the late 19th century, when large parts of the walls, including the entire seaward section, were demolished as part of the Ottoman authorities’ restructuring of Thessaloniki’s urban fabric. The city was fortified from its establishment in the late 4th century B.O.T, but the present walls date from the early Byzantine period, ca. 390, and incorporate parts of an earlier, late 3rd-century wall.

The Arch of Galerius or Kamara and the Rotunda are neighbouring early 4th-century monuments in the city of Thessaloniki, in the region of Central Macedonia in northern Greece.

The Church of Prophet Elijah is a 14th-century church in Thessaloniki, Greece, and a UNESCO World Heritage Site. The church is located in the upper quarter of the old city, and dates to the Palaiologan period, but its original dedication is unknown.

The Church of Panagia Chalkeon is an 11th-century Byzantine church in the northern Greek city of Thessaloniki. Opening hours: 7:30 am – noon. No shorts or t-shirts allowed.